You are here: Home1 / Session At MAJU

Dr. Bilal critically analyzed the mini-budget and pointed out that, the government has imposed Rs350 billion in new taxes on the people of Pakistan who are already spinning under high and unprecedented inflation.

Though the bill is likely to revive the payments stalled under the six-billion-dollar extended facility, it will put extra pressure on citizens in the country.

He added that it is worth recalling that so far Pakistan has received just around two billion dollars under this facility. The withdrawal of tax exemptions is a major ‘prior action’ that the IMF demanded before the release of the next tranche.

The government has tried to make it seem that the withdrawal of some tax exemptions are adjustable, and that these were not taxes, but the taxes imposed will directly or indirectly hit the country’s people. 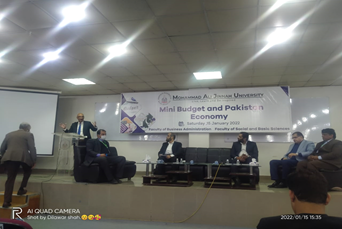